A Parable: The Velveteen Rabbit 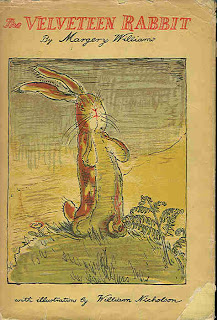 Today I want to tell you a story that children have loved for generations.  It was written by Marjory Williams, and is called The Velveteen Rabbit.

THERE was once a velveteen rabbit, and in the beginning he was really splendid. He was fat and bunchy, as a rabbit should be; his coat was spotted brown and white, he had real thread whiskers, and his ears were lined with pink sateen. On Christmas morning, when he sat wedged in the top of the Boy's stocking, with a sprig of holly between his paws, the effect was charming.

For a long time, the Velveteen Rabbit lived in the cupboard, or on the nursery room floor, and no one thought very much about him.  The other toys, especially the mechanical toys that wound up and moved on their own, thought the rabbit was old-fashioned and wouldn't give him the time of day.  The only toy in the nursery who was nice to him was the Skin Horse.