The Woman at the Well

Prop: Display Carracci's painting, "The Samaritan Woman at the Well" found at https://commons.wikimedia.org/wiki/File:Annibale_Carracci_-_The_Samaritan_Woman_at_the_Well_-_WGA4446.jpg

This is an oil painting created centuries ago by a famous painter named Annibale Carracci.  It's a picture of when Jesus met a woman in a country called Samaria.  This story can be found in the Bible, the Gospel of John, chapter 4.

Jesus is the person on the far right, in a peachy-colored robe with a blue sash, and the woman is in the center; the only woman in the painting.

One day, Jesus and his disciples needed to travel from Judea home to Galilee, and Jesus suggested they take a short cut through Samaria.  A short cut sounds like a good idea, right?  Well, it would be, except the people where Jesus came from couldn't stand the people of Samaria.  It was a feud that had gone on for centuries!  It was so bad that most Jews took the long way around to avoid passing through Samaria, whenever possible.

Jesus' disciples may have felt uncomfortable, even anxious, with Jesus' decision, but he was the teacher, and so they all took the short cut.

They came to a small village, right at lunch time.  The disciples went into town to get something to eat and Jesus stayed behind at the well to rest.  Can you see that big, round thing Jesus is leaning against?  That is the well.  You can even see a big jug there, too.  That's what the woman would put the water in to take home, but I'm getting ahead of the story.

While the disciples were away, a woman came to draw water from the well.  They didn't have indoor plumbing in those days.  Jesus said to her, "Would you give me a drink of water?"  Now, this sounds like a reasonable request.  Jesus was tired and thirsty, and he didn't have a jug or cup of his own.  But actually, Jesus asking for a drink from the woman was quite strange for two reasons.

1. As I already mentioned, she was a Samaritan, and Jesus' people didn't speak to Samaritans, unless they absolutely had to.

2. She was a woman.  In Jesus' time, men and women kept their lives separate, except for at home, and the men didn't speak to women they didn't know.  It was against the rules.

Carracci chose to picture the end of the story in this painting.  You can see that the disciples have returned--see the man on the left is carrying loaves of bread--lunch--in his sash.  One man is pointing at Jesus as he speaks to another disciple, as if he's saying, "Look at that!  Jesus is speaking to that woman from Samaria!  What's up with that?"  And then two other disciples are whispering to each other.  Also, the woman looks to be walking away from Jesus and the well.  The Bible tells us that she left Jesus to run and tell others about her encounter with him--that she had met the Messiah--and that in her excitement, she left her water jug behind.  Who could blame her? 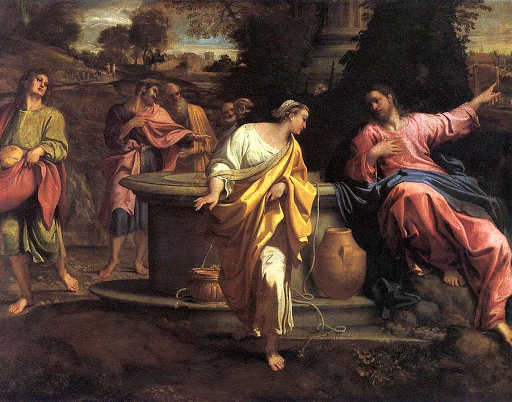