One Flat Jesus printable for each child, copied on card stock, if possible.   Simply Google "Flat Jesus Printable," and several choices will come up.
Copy of the book, Flat Stanley (optional)

Have you ever read the book, Flat Stanley?  It was written in 1964 by Jeff Brown.  Even though that was a long time ago, Flat Stanley is still a very popular book.

The story goes like this:  One night, while Stanley Lambchop is sleeping, a giant bulletin board falls off the wall above his bed and lands right on him.  He is unharmed, except that he is flat--like a pancake.  After the shock wears off, Stanley realized that being flat allows him to do many things he could not do before--like slip under doorways and fly high in the sky like a kite.  One time, his parents slid him into an envelope and mailed him to his friend in California for a little vacation.

In 1995, a school teacher named Dale Hubert started the Flat Stanley Project.  He made copies of Flat Stanley for his students.  He invited the kids to color in their Flat Stanleys, cut them out and send them on adventures.  The students wrote stories about their Flat Stanleys, and then mailed them with their stories to people they knew, asking that person to write a story about Stanley's adventure, to take a picture of Flat Stanley wherever he was, and return the photo and story to the original sender.

Flat Stanley has gone on amazing adventures, and has met some pretty impressive people.  He appeared on the Tonight Show with Jay Leno, he's been to the Oscar Award Ceremony, had his picture taken with 3 U.S. presidents, traveled on the Space Shuttle Discovery, ridden with Nascar drivers Joe Nemencheck and Richard Petty, been photographed with world champion boxer Muhammed Ali, and NFL quarterback Peyton Manning--the list goes on and on.

I have brought with me today (mailed/emailed you) an outlined drawing of Jesus.  We could call him Flat Jesus.  I invite you to color him any way you'd like, and to cut him out.  You may carry him with you as you go about your day, as a reminder that Jesus is always with us wherever we go.  You may take pictures of you and you Flat Jesus in various places as you go about your day and send them to me to put on our church Facebook page.  You may want to mail Flat Jesus to a friend or family member with a letter telling why Jesus is important to you.  The important thing is to know that Jesus loves you and is always with you. 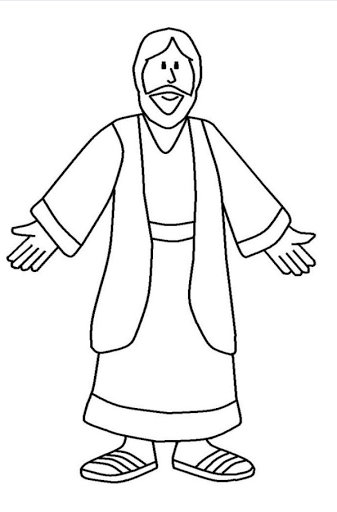