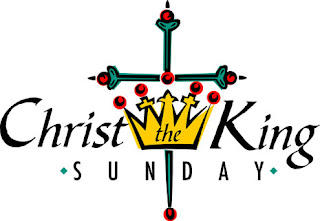 Good morning, everybody!  Today I want to talk with you about kings.  Kings and queens are important rulers, aren't they?  They are leaders who are responsible for all of the people in their country.  Good kings and queens do their very best to make sure all of their people, or subjects, are able to live healthy, happy lives, with enough food to eat, and a place to live, and work to do.  Throughout history there have been good kings whose people thrive and who love their leaders.

One famous king in the Bible was King David.  As a boy, King David was a shepherd who took care of sheep for his father.  You may remember that King David made a name for himself by killing the huge, powerful enemy, Goliath.  Goliath was big and strong, and David was much smaller, but David had one thing Goliath didn't have...David had faith that God was on his side.  David was so sure of it, that he wasn't afraid of Goliath at all!  When none of the Hebrew soldiers would volunteer to fight Goliath, David stepped forward.  He took a rock and placed it in his sling shot--the same weapon he used to protect his sheep from bears and wolves.  David swung the stone around and around in the slingshot and then let it fly.  It hit Goliath just right, killed the mighty enemy, and the Hebrew people won the battle, all thanks to David, his slingshot and his faith in God.

David grew up to become the most beloved king Israel ever had.  He wasn't perfect, but he really tried his best to serve God and to serve the people so that everyone in the kingdom of Israel could live a good and faithful life.  I think that is the number one thing that makes a person a good leader--that he or she see themselves as a servant of the people.

The very best servant King ever is Jesus.  Today is Christ the King Sunday!  The Bible tells us that Jesus is the King of kings--the Ruler of all rulers.  There are many kings and queens and presidents and rulers in this world.  They may be Top Dogs in their own countries, but Jesus is the ruler of the Kingdom of God, and that means that he is more important and more powerful than all those other monarchs put together. Rulers who believe look to Jesus for guidance and strength as they rule their own countries.  And yet when Jesus lived here on earth, he fed the hungry.  He healed the sick.  He washed his disciples' feet.  He died on a cross.  He lived a life of service and cared deeply for his people.  He still does.

We are subjects in the Kingdom of God.  We are God's people, and Jesus is our king.  For this, we can be very thankful, because we know that Jesus loves us and cares for us.

Dear God, On this Christ the King Sunday, we remember that no matter where we live, we are members of Your Kingdom.  Help us to follow Jesus' example of serving others.  Amen.