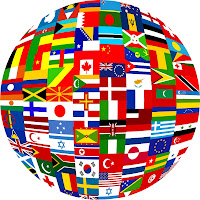 Sunday, October 7, 2012
World Communion Sunday
Psalm 8
Props: Flags or photos of flags from Mexico, Japan, Great Britain, Democratic Republic of the Congo and your own nation, and the Christian Flag

Good morning, everybody!  Today I want to show you pictures of several national flags.  First, there’s this one.  This is the flag of Mexico.  I like the bold colors in Mexico’s flag.  And this white one with the red circle in the middle—this is Japan’s flag.  The red circle represents the sun.  This is Great Britain’s flag.  It is called the Union Flag, or Union Jack, because the design is a combination of three flags in one—the flags of Scotland, Ireland and England.  Here is a picture of the flag from the Democratic Republic of the Congo.  This is a new flag design that has only been used by the country since 2006.  The gold star stands for “the light of civilization.”  And finally, here is a flag you might recognize right away.

This is the flag of your country—our nation’s flag, right?  You see our flag flying outside of schools, post offices, court houses, city hall, in front of some people’s homes, at gas stations, in public parks—lots of places, right?  And if you were to go to Mexico, or Japan, or Great Britain or the Congo, you would see the flags of those countries flying, too.

Each of these flags represents a different country.  Right now, there are 242 countries in the world.  That means there are 242 national flags.  People often feel very strongly about their national flag because it reminds them of their country, their homeland.


"I pledge allegiance to the Christian Flag
and to the Savior for whose kingdom it stands.
One community, uniting all humankind,
in service and love."

Today is a special day in the life of the Church called World Communion Sunday.  Today we pay special attention to the unity that Christians all over the world share.  We all love Jesus and wish to serve Him.  The love of Christ brings us together, not matter where we live, no matter which national flag we wave, no matter what country we are from.  Thanks be to God!

(If your church does not participate in World Communion Sunday, you can skip the above paragraph.)

I’d like to close our time this morning by saying together the Pledge to the Christian Flag.  Will you please repeat after me?

to the Christian Flag

and to the Savior

for whose kingdom it stands.

in service and in love.  Amen.