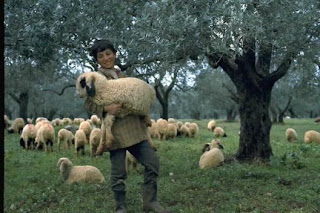 Second Sunday in Advent
A Shepherd's Story
Prop: The Shepherd from a Creche

Good morning, girls and boys!  Today is the Second Sunday in Advent, which means Christmas is getting closer, isn't it!  As we prepare for Jesus' birthday, I want to tell you a story.

Once upon a time, a long time ago, there lived a young boy named Eli.  Even though Eli was only 9 years old, he had a job.  Eli worked with his father as a shepherd.  Eli's grandfather had been a shepherd, and his father before him.  Eli came from a long line of shepherds!

Eli liked his work as a shepherd.  He liked being outdoors--except when it was cold and rainy.  He liked his sheep, with their woolly bodies and sweet faces.  He liked the other shepherds who worked with him, especially his best friend, Micah.

Eli's favorite part of his job were the challenges--like when a sheep would wander off from the flock and need to be found.  Or when a lamb got itself stuck in a rocky crevice and needed to be lifted out with a shepherd's crook.  The most exciting work to be done was keeping coyotes, wolves and other animals away who would like to eat the sheep for their supper!  Eli didn't want his sheep to be hurt, but Eli enjoyed rising to these challenges and keeping the animals safe from harm.

Part of Eli's training as a shepherd was to practice using a slingshot every day so that it could be used effectively against a hungry wolf or bear when needed.  Eli and Micah and all of their co-workers knew the story of David--a shepherd boy who killed Goliath with his slingshot and grew up to be kind of Israel.

Eli liked being a shepherd, but the story of King David was his favorite of all the stories his father told him.  He dreamed of being asked by God to do something really important some day--like David when he saved his people by killing Goliath.

On night, after a long and boring day, in a long and boring week of no interesting challenges to meet--no lost sheep, no lambs in distress, no wolves ready to pounce--Eli, his father Micah and the other shepherds were finishing their supper around the campfire.  Eli was feeling particularly restless that night.  "Tell us a story, Abba," he asked his father.  "Please!  Tell us the story of David, the shepherd boy."

Eli's Abba started the story, "It was during the reign of the very first king of Israel--King Saul.  Israel was at war against the Philistines..."

Suddenly, an angel stood before the shepherds, and the night sky was filled with the glory of the Lord.  And the shepherds were terrified!  They had never, ever seen anything like this in their lives!!  They didn't know what to make of it.  But the angel tried to calm them down, saying, "Do not be afraid, because I bring to you the best news anyone has ever heard.  This good news is for all people everywhere--This very day, in Bethlehem, the City of David, a Savior has been born for you, who is Christ the Lord.  You will know who he is because you will find him wrapped up in swaddling clothes and lying in a manger."

Then, a whole host of angels appeared and they all sang together,

"Glory to God in the highest,
and on earth peace among people with whom God is pleased."

And just as suddenly as the angels had appeared, they were gone.

The shepherds sat in amazement for a few seconds, then they all said at once, "We have to go to Bethlehem to see this awesome event!"  "But wait--what about the sheep?" one of the men asked.  "Two shepherds will need to stay behind to keep them safe," another answered.  "Please, don't make me stay behind!  Please don't make me stay behind," Eli prayed silently.  "Benjamin and Mark, you two stay and we'll tell you what we see."

And so Eli hurried with the other shepherds to Bethlehem.  There they found a cave, which was used to stable animals, and in the cave were Mary and Joseph.  And lying in the manger was their new-born son, Jesus.

Eli's greatest wish had come true.  He knew that the shepherds were told the Good News of Jesus' birth for a reason.  That angel could have made his announcement to anyone, but God chose the shepherds.  They were assigned a new, vitally important job.  For the rest of his life, Eli shared the story of that First Christmas every chance he got, and we include shepherds in our Christmas creches to this day.

Let's pray together.
Good and Gracious God, you give each one of us important work to do.  You ask us to share the Good News of Christmas and the birth of the One sent to save the whole world.  Help us to deliver the Good News in all we do and in all we are.  Amen.
Posted by Rev. Dianne at 8:07 AM