The Spirit of Giving

Good morning, everyone!  I brought something with me to show you this morning.  It's a piggy bank!  Not all banks are shaped like pigs, of course.  Banks come in all kinds of shapes, but most of them do have a slot in the top.  Do any of you have a bank at home, with a slot in the top to put the money in?  If you do, raise your hand.

Jesus was in the Temple in Jerusalem.  The Temple was the biggest, fanciest sanctuary where the Hebrew people worshipped.  For the Jews, it was the holiest place on earth.

On the day of our story, Jesus had been teaching large crowds of people.  When he was finished, Jesus and the disciples rested in the Temple.  They sat in what was called the Treasury.  From there, Jesus could see the people putting their offerings in the money box.  They didn't pass offering plates through the crowd like we do today.  At the Temple, folks went to the Treasury and put their money in the money box whenever they felt like it.

So, Jesus watched people come and go, and make their offerings to God in the Treasury.  He saw many rich people come along and put in large amounts of money.  Then he saw a widow walk quietly up to the Treasury box.  She slipped two small coins into the box, and quickly walked away.  The coins together were worth about one penny.  And yet, do you know what Jesus told his disciples?  He said to them, "This poor widow has put in more than all those who are contributing to the treasury."

Jesus went on to explain that all the other people he saw had given what they had left over.  But the poor widow had given all that she had.

Even if we don't have a lot, we all have something we can share with those who have less than we do.  And even though giving to others makes our piggy banks lighter, it makes us, and God, very happy. 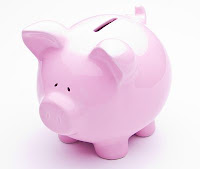 Kind and Generous God, Help us to be generous, too.  Help us to share the good gifts you have given us with others so that all may know of your love and care.  In Jesus' name, Amen.